It fires 5.0 gram projectiles at a velocity of 500 to 600 meters per second. A magazine containing six cartridges is inserted into the pistol handle; one cartridge is fired for each pull of the trigger. Pre-loaded magazines may be inserted into the pistol when it is empty, taking a small amount of time to do so. Body pistol ammunition is generally not interchangeable with the ammunition for any other types of guns. [2] A body pistol can be fitted with a silencer. [3] 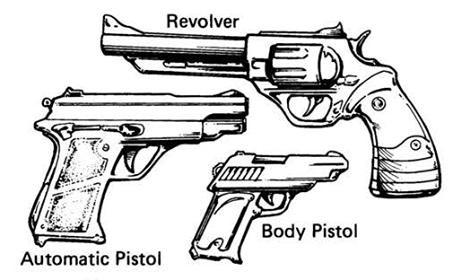 The Body Pistol is often smuggled into high tech level worlds. The pistol is small and easy to conceal. Designed to evade detection devices at starports, it is constructed of non-metallic material. The magazine holds six rounds and is typically loaded into the pistol's handle.

Body Pistols come of age in the TL:7-9 epoch and are never really considered obsolete as they remain useful well into the TL:13-15 epoch. However, the weapon tends to be superceded by the Laser Pistol and Gauss Pistol as they become increasingly miniaturized. [5]

This list of sources was used by the Traveller Wiki Editorial Team and individual contributors to compose this article. Copyrighted material is used under license from Far Future Enterprises or by permission of the author. The page history lists all of the contributions.
Retrieved from "http://wiki.travellerrpg.com/index.php?title=Body_Pistol&oldid=671508"
Categories: