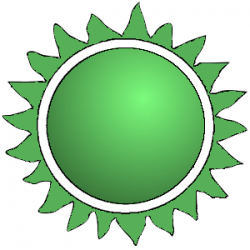 A Bio-Identenoid or Typoid is a simple lifeform identification tool used by explorers and other such adventurous souls who do not possess extensive biological sciences expertise. The Anglic suffix "-oid" means "similar to" or "having the likeness of". Bio-Identenoid is a scheme of classifying creatures by what other creatures they look like, applying a descriptive identification for a broad audience, rather than any rigorous scientific classification scheme.

"Typoid" is an identification scheme used in popular culture with little or no rigorous scientific backing. The most widely used version has a very strong Terran / Solomani structure with most comparisons made to creatures originating on Terra (Solomani Rim 1827). Members of various Explorer Services with only rudimentary training in Xenobiology but are familiar with the more common lifeforms from those worlds use this system for a quick identification system.

In theory typoids are drawn from biological taxonomic nomenclature from the class, order, phylum, and kingdom levels. In use the typoid classification is inconsistent about which of the terms are used. Some terms are generated from common language, mythology, popular culture references, or slang terms.

Specific typoids are a list of traits which distinguish the derivative creature or are highlight the unique nature of the type of creature. When creature being identified is shown exhibiting a majority of the traits assigned to the typoid then identifies as the specific typoid. Because of the loose classification scheme it is relatively common for a creature to meet sufficient criteria to qualify as more than one typoid classification.

The system is widely rejected by the broader scientific community. The classifications are subjective and frequently based upon minimal observations. The system leads to over-generalization to the point of encouraging dangerous mistakes in identification.

Cultural anthropologists and other social scientists are the most skeptical of the system as it drives cultural assumptions and prejudice. Many of the comparative creatures have positive or negative cultural connotations not all of which are immediately apparent. These cultural connotations are then applied to the identified species much to their dismay. Overcoming these externally applied connotations can be a time consuming and difficult challenge.

For example, the Aslan, frequently described as "felioid", have no physical or cultural ties to the feline creatures of Terra beyond the most superficial external resemblances. Yet many known, or assumed, traits of Terran felines are ascribed to the Aslan even when they don't apply or are obviously wrong. When applied in practice this has led to violence.

This list of sources was used by the Traveller Wiki Editorial Team and individual contributors to compose this article. Copyrighted material is used under license from Far Future Enterprises or by permission of the author. The page history lists all of the contributions.
Retrieved from "http://wiki.travellerrpg.com/index.php?title=Bio-Identenoid&oldid=627206"
Categories: