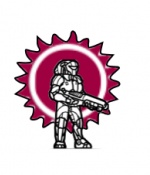 An Imperial Marine Regiment of fearsome reputation, based with 208th Fleet as it's reaction force, that fought both inside and outside the Imperium for 150 years. Broken up under somewhat shameful circumstances in the changed political climate of the 1130s.

The Regiment fought in the Karin Pacification (970 to 977), The Third Frontier War (979 to 986), was deployed in Foreven Sector with a detachment from 208th Fleet in the 1020s and returned to Five Sisters for garrison duties at Flammarion until the start of the Fourth Frontier War. During that war, it deployed, again, into the Foreven Sector to support client states being threatened by Zhodani insurgents.

After the war, the regiment returned to Karin where it remained until the Independence Referendum in the 1130s. By this time, its reputation for brutality was well established and the newly formed 22nd Regency Marine Line Regiment had taken on the role of Fleet reaction Regiment. Thus the Regiment was broken up, its personnel and equipment being transferred to other duties. The actual official dissolution of the regiment was due to take place with a certain ceremony, but this was cancelled due to the threat of mutiny in the ranks. The Fourth Battalion was said to have laid down its arms only under threat from 22nd Regency Marine Line Regiment and a fleet cruiser.

This list of sources was used by the Traveller Wiki Editorial Team and individual contributors to compose this article. Copyrighted material is used under license from Far Future Enterprises or by permission of the author. The page history lists all of the contributions.
Retrieved from "http://wiki.travellerrpg.com/index.php?title=3951st_Imperial_Marine_Regiment&oldid=604092"
Categories: