Zdez Magna is a ring of many small worldlets (planetoids AKA an "asteroid belt"), not capable of retaining an atmosphere or water, and is also a low-population vacuum environment with a population less than 10,000 sophonts in population size, warranting hazardous environment precautions.

The primary star of the system can be seen from across Charted Space. 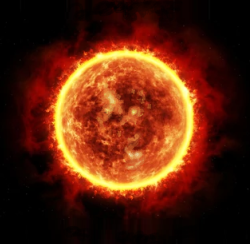 The worlds of the system have been surveyed. They consist of:

Zdez Magna has a pressure of less than 0.001 atmospheres which requires the use of a Vacc Suit. TL–8 or more advanced survival gear is required to settle this world.

Zdez Magna has no free-standing water or ice on the surface. Wilderness refueling isn't possible on this world. Water for the inhabitants needs to be imported and extensively recycled. These worlds are classified Desert World or a Hell World depending on their atmosphere.

Zdez Magna has a Class D Starport, a poor quality installation which has few of the expected amenities. There is unrefined fuel for starships and a limited variety of ship provisions. There is no shipyard of any kind, but there may be parts and technical support for doing minor services and repair. Ports of this classification generally consist of only a downport, unless this is a trade port or system with an hostile environment mainworld.

Port facilities within the system include:

Zdez Magna possesses a Technology Level of TL–12 or TL-C in Hexadecimal Notation.

Zdez Magna has no law in practice. It is an Anarchy. On many worlds, this by itself justifies an Amber Zone advisory. There are few laws, covering only important areas. There may be few or no law enforcement officers, the expectation is citizens will bring law breakers to the attention of the Judicial system. Legal proceedings will be fast, with few people involved. For interactions outside of the framework of the laws, cultural norms dominate.

Zdez Magna has a population of 70

A single community within a large rocky planetoid.

This list of sources was used by the Traveller Wiki Editorial Team and individual contributors to compose this article. Copyrighted material is used under license from Far Future Enterprises or by permission of the author. The page history lists all of the contributions.
Retrieved from "http://wiki.travellerrpg.com/index.php?title=Zdez_Magna_(world)&oldid=683607"
Categories: