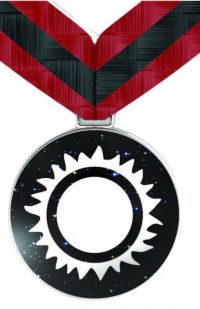 The Starburst for Extreme Heroism (SEH) is the highest award for courage given by the Imperium. It is given out rarely and only for the most extreme cases of heroic action under fire.

The medal is a 70mm wide circle made of iridium and is suspended from a 25mm-wide red-and-black cloth ribbon around the neck.

The obverse is inlaid with a pattern of colored gemstones in the form of an Imperial Starburst. The Starburst is in the service color of the recipient's arm of service. The Imperial Interstellar Scout Service is red; the Imperial Navy, yellow; the Imperial Army, black; and the Imperial Marines, maroon.

The reverse is engraved with the words: "With the Gratitude of the (Emperor/Empress) and Imperium, Our Thanks to (recipient's name) of (soldier's homeworld) for (his/her) Actions on (place where the medal was won) on (date of action)".

It is the only award that doesn't come in classes (though it can be granted either as a "straight" SEH to any member of the Armed Forces of the Imperium, or as the more prestigious SEH "with diamonds" (*SEH*) which is normally only awarded to commissioned officers) and is issued uniquely. Every additional receipt is awarded with another medal.

Most of these awards have been given to members of the Imperial Army or Imperial Marines, with a significant number also awarded to the Imperial Navy. Many of the recipients of this award have received it posthumously.

This list of sources was used by the Traveller Wiki Editorial Team and individual contributors to compose this article. Copyrighted material is used under license from Far Future Enterprises or by permission of the author. The page history lists all of the contributions.
Retrieved from "http://wiki.travellerrpg.com/index.php?title=Starburst_for_Extreme_Heroism&oldid=655288"
Categories: