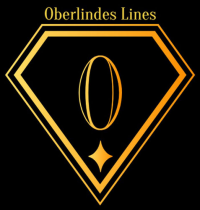 Oberlindes Lines is a major interstellar shipping company, a multi-sector Line, in the Regina Subsector.

Oberlindes Lines was established in the aftermath of the Fourth Frontier War, depending to a great extent on Imperial surplus transport ships to meet the demand for trade goods by worlds cut off by the war.

Oberlindes Lines was a family run free trader operation until it acquired naval surplus transports and used them to provide extensive cargo service in the Regina subsector. At the same time, Oberlindes expanded into trade with the Vargr just beyond the Imperial border, and has become a major importer of Vargr products and goods.

The Oberlindes name is an old one in the trade and commerce business in the Marches. Roxanne Oberlindes established the first line to bear the name in 487 and built a family business which thrived between each of the several wars which have wracked the Marches in the past millenium. The first major increase in Oberlindes' size came in 1049, with the acquisition of Emissary, a surplus cruiser declared excess by the Imperial Navy. This ship, armaments intact, served as the flagship for Oberlindes' excursions into the Vargr Extents on trade expeditions; the venture proved highly successful. A base for Oberlindes was established just beyond the Imperial border (some irregularities in the ship transfer made it impractical to bring the ship into the Imperium) and served as a clearing house for trade good shipments between Regina and the Vargr worlds. Marc Oberlindes himself served as the captain of the Emissary in the early years, and forged many valuable contacts in the Thoengling Empire and the Commonality of Kedzudh. The profits from these trade ventures were invested in new ships, and as the years went by the family found it harder and harder to keep up the pretense of being just a group of individual free traders.[1]

In the years following the False War, Oberlindes Lines obtained an Imperial charter and began operations with a large fleet composed almost entirely of navy surplus ships - now numbering in the hundreds. The organization concentrates on the smaller feeder routes, but has recently expanded into main line service, in direct competition with Tukera Lines and other more established major shipping lines.

Marc hault-Oberlindes, patriarch and controller of the line, was awarded a baronial patent, complete with estates on Feri (Spinward Marches 2005 B384879-B), by direction of the Emperor in 1101 for his contribution to the economic recovery in the Marches following the Fourth Frontier War.

This business is primarily known to operate out of the following locations:
Charted Space:

Non-canon: The Oberlindes ship maintenance facility on Paya is a 4,000tn TL12 shipyard to enable repairs and maintenance in Aramis Subsector of ships sourced from Regina (TL-12) ship builders. Access to the Paya facility is only via the Starport and is restricted to employees only. Interaction with Payan locals, whilst not discouraged, is rare beyond the obligations of the Oberlindes lease. Oberlindes employees are not considered part of the population, as immigration is forbiden on Paya, rather they are present on long term assignment. There are no Payan's on the Oberlindes payroll, mostly due to lack of interest by the local population.

The lease, amongst other obligations, includes a requirement that Oberlindes provide open commercial access to 1,000,000 tons of refined fuel. This contributed significantly to Paya regaining thier Class A starport rating (requiring 2,000,000 tons refueling capacity each week. The Imperial Naval Base lease on Paya provides for the balance, a "top up" at need. Commercial traffic however has not yet ever required this.) A further obligation is the mantenance of the Highport, a large, now partially used facility, installed before the great Payan disaster of 1075 and intended to service a population of 12 million (current population 500).

To protect the virtual monopoly Paya Shipyards has on ship building in the local J1 cluster, the Oberlindes facility lease prohibits the maintenance of non-Oberlindes vessels, helping to keep the independent commercial fleet in the cluster at TL9. The Oberlindes view is that they are unlikely to want to maintain competitors ships and quoting local laws is a diplomatic way of turning away those that may try.

Paya Shipyards building 100tn J-1 freighters is not considered a commercial threat to Oberlindes, rather those independent owners provide a cost effective feeder service to the Class C and/or high population worlds on Oberlindes routes. Competition is one sided, Oberlindes with its clean & shiny ships, TL-12 creature comforts, shipping efficiency and regular service, gets the bulk of the shipping and passengers on the routes they service.

This list of sources was used by the Traveller Wiki Editorial Team and individual contributors to compose this article. Copyrighted material is used under license from Far Future Enterprises or by permission of the author. The page history lists all of the contributions.
Retrieved from "http://wiki.travellerrpg.com/index.php?title=Oberlindes_Lines&oldid=676552"
Categories: