This is a world-system under construction and is currently being input-programmed into the Traveller RPG Wiki.

Centrum is a vacuum world, which warrants hazardous environment precautions.

The companion is Capacitor, a magenta-coloured T-type brown dwarf lying at the barycenter of Anode and Cathode. It is not luminous, it has a mass of 0.062 Sols and a diameter of 60,000 km. Capacitor has an axial tilt of 90 degrees, with its poles pointing at Anode and Cathode respectively: the poles follow the two stars as they orbit one another. (I) Centrum, a tiny golden world, forms the outer system: it is the only significant planetary body within the system. 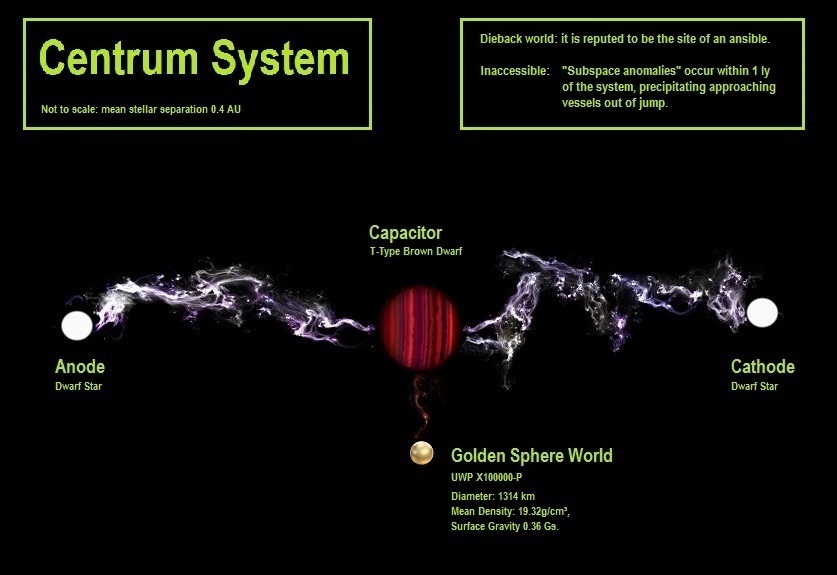 (I) Centrum (UWP X100000-P) is designated the mainworld. It orbits Capacitor at a mean distance of 200 diameters (0.08 AU / 11.9 million km), in the outer system. It has an orbital period of 26 days 4 hours: it is tidally locked to Capacitor. The axial tilt is 90 degrees relative to Capacitor. Centrum has a diameter of 1,314 km, a density of 19.32 g/cm³, and a surface gravity of 0.36 G: it is perfectly spherical. The world is geologically inert. Its atmosphere is rated as Vacuum. It has no hydrosphere. Mean surface temperature: -235°C.

Total surface area: 5.4 million km². The surface of Centrum is a bright golden color and is completely smooth and featureless. Gigantic streamers of reddish-white energy, hundreds of kilometers wide and millions of km long, arc from the equatorial regions of Capacitor and play across the surface of the world.

Centrum has no native life. In fact, it seems that life of any kind cannot withstand prolonged exposure to the pulses of "subspace energy".

Centrum features heavily in the Mythology of Lon Beon.

Centrum does not have a starport. The Class X Starport is an indication that no starport exists in the system. There are no facilities or services available, and no site marked for landing.

Centrum possesses a Technology Level of TL-23 or TL-P in Hexadecimal Notation.

Some tales of the Mythology of Lon Beon indicate that the Slavers, the mythical builders of Centrum, were themselves utilising an artifact of far greater advancement, antiquity and power. The golden sphere-world, it is claimed, is merely a gargantuan shell around whatever thing it was that they found.

This list of sources was used by the Traveller Wiki Editorial Team and individual contributors to compose this article. Copyrighted material is used under license from Far Future Enterprises or by permission of the author. The page history lists all of the contributions.
Retrieved from "http://wiki.travellerrpg.com/index.php?title=Centrum_(world)&oldid=635248"
Categories: